Trimix Injection – How To Use It The Right Way 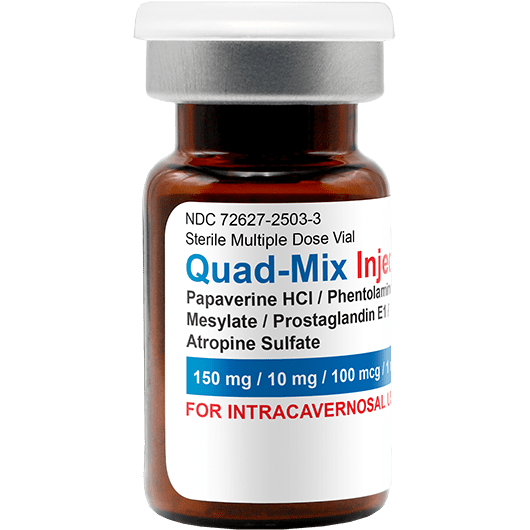 Trimex is a compounded drug, which is injected into the penis in the case of erectile dysfunction. It contains three vasodilators: papaverine, phentolamine, and prostaglandin E1.

It is injected in the side of the penis at the base. Never where inject in the top or the bottom as this could cause injury.

It is only one injection per time, and you can inject it as often as every other day. Again, changing sides with each injection.

You typically see full results within 10 to 15 minutes after injection.

In most cases ED oral pills will be enough to have and maintain erection. You can read about Viagra and Cialis in our article.

Can I Buy Trimix Injection Online?

You can buy Trimix only from a compounding pharmacy. You cannot purchase Trimix injection from Walgreens, CVS, Wal-Mart and other pharmacies.

How Much Does Trimix Cost?

Trimix will cost you approximately $90 for refills every three to six months, depending upon the frequency of use. This includes medication, syringes, and alcohol wipes. You will get 5 milligrams of medication.

It must be refrigerated as heat causes the medication to degrade. A pharmacist may give you icepacks when you’re taking home, but don’t leave it in the car or on the counter for a long time.

The risk with Trimix includes bleeding and infection. You can reduce the risk by using alcohol wipes and pressure at the injection site.

The curvature of the penis, which is called Peyronie’s disease, may also occur. If you notice that you’re developing curvature, contact your doctor.

The most significant risk is priapism, which is an erection that lasts longer than four hours. If you were to have a rigid erection for two hours, you would need to take two regular release Sudafed.

If after one additional hour after taking Sudafed, your erection is not reduced, please contact regional urology or go to the E.R. if the office is not open. You have to speak with a urologist to inform of your situation.

If this erection were to persist longer than four hours, it may cause irreversible damage and result in permanent erectile dysfunction. If you were to continue to get prolonged erections, please call your urologist.

How To Inject Trimix

In this article, we’re going to show you how to properly inject Trimix medication.

You’ll use the alcohol prepared to clean the top of the vial, as well as the injection site.

Open the alcohol prepared and use it to clean the rubber membrane on the top of the Trimix vial. Remove the cap on the back of the syringe, exposing the plunger. Then remove the front cap and expose the needle.

Before you place the syringe inside the vial, you’ll want to draw back the same amount of units you’ve been prescribed to inject.

Insert the syringe into the vial through the rubber membrane. You’ll want to press down on the plunger and push the air into the vial. You’ll then want to slowly drawback the required amount of units into the syringe.

Pool the syringe straight out of the vial. Set the vial down and then recap the front of the syringe.

The area of the penis that you’re injecting the medication into is called the Corpus Cavernosum. It runs on either side of the penis. You’ll want to make sure to inject at the 10 o’clock or two o’clock position.

Do not inject on the same side. Each time you use the medication, you’ll want to make sure that you’re alternating sides between usage.

This diagram shows where the Corpus Cavernosum is located inside the penis.

Pull the syringe straight out of the penis. After injecting, you’ll want to apply pressure to the injection site. You’ll then want to massage the area of entry for about one minute and allow the medication to spread evenly throughout the entire penis.

This is the same amount of pressure you’ll want to apply to the plunger when you go to inject the Trimix medication.

If you find that you have to apply more pressure than this, then you may not be in the Corpus Cavernosum. It means the medication will not be effective.

How To Use Trimix Antidote

If you experience an erection lasting longer than two hours, you’ll want to apply the antidote to the medication, which is called phenylephrine. You apply it the same way you apply the Trimix medication.

You’ll want to inject one inch above the base of the penis at the 10 o’clock or two o’clock position. You want to make sure that you avoid any veins.

And again, you’ll want to massage the area of entry for about one minute, right after you administer the medication.