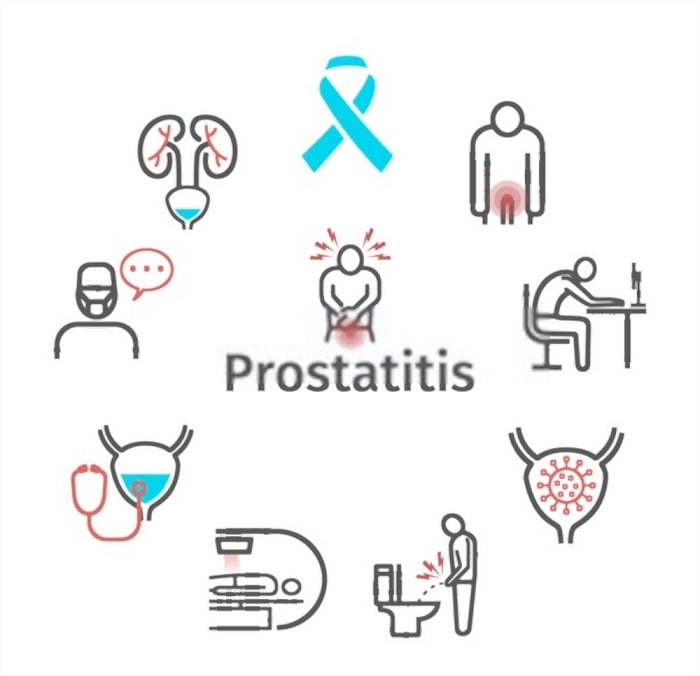 Prostatitis is an inflammatory process affecting prostate tissue. It is one of the most common diseases in terms of urology.

The disease is diagnosed mainly in men from 25-30 years. However, the risk of disease development increases significantly with age.

There are two types of prostatitis: acute and chronic. In the latter case, inflammation is characterized by a long course with periodic relapses. This condition occurs much more often compared to the acute form.

Many diseases of the prostate gland, such as benign hyperplasia or oncopathology, are typical for older men. However, prostatitis does not belong to this category. Its symptoms usually appear in men in their 30-50 years.

The cause is often infectious due to the penetration of harmful bacteria from the urogenital canal or genitourinary system glands. It is explained by the proximity of the urethra and the anus.

Among the most common pathogens of bacterial prostatitis are gram-negative organisms. Often the inflammatory process develops together with STI infection: chlamydia, gonococci, trichomonads, herpes virus, etc.

As a rule, these forms of the disease are diagnosed in men under 35.

There are also non-bacterial varieties of prostatitis, which is usually caused by:

A complex of disorders accompanies the disease, which affects the entire urinary system’s work. Among the main symptoms are:

Symptoms of prostatitis in the acute form differ depending on the stage of the disease:

Catarrhal. The patient complains of frequent urges, pain during urination, pain in the perineum and sacrum.

Follicular. Pain syndrome becomes intense, may extend to the anus, and intensify during defecation. Urine is excreted in a thin stream. In some cases, urine retention occurs. There is an increase in body temperature for an extended period or moderate hyperthermia.

Parenchymal. The man begins general intoxication of the body with chills and a temperature of up to 104F (40C). The pain syndrome in the perineum becomes sharp and throbbing. The act of defecation is difficult, and the bladder’s normal emptying is impossible, resulting in acute urinary retention.

The chronic form of prostate inflammation can be a consequence of the absence or untimely treatment of the acute stage. However, it develops immediately in many men and has vague symptoms.

Among the main signs are:

In general, the clinical picture varies over time, differs in intensity in various patients, and can go into a latent form when trying to self-treat.

Symptoms of the chronic disorder can be a burning sensation in the urethra, pressure in the perineum, dysuria, impaired sexual function, and increased general fatigue. Mental depression, irritability, and anxiety may arise because of potency problems.

Primary chronic prostatitis develops over a long time. Blood congestion in the capillaries provokes the initial stage of non-bacterial inflammation, which leads to the disease.

In case of infection, the cause of the disease becomes a chronic inflammatory process because of trichomonas, ureaplasma, chlamydia, or gonococcus.

Primary infection masks the signs of prostatitis. Thus, its treatment does not eliminate the inflammation of the prostate. Often the accession of a concurrent problem goes unnoticed by the man.

Inflammation increases the volume of the prostate gland, which leads to compression of the ureter. As its lumen decreases, frequent urge to urinate and the feeling of not fully emptied bladder appear.

Dysuric disorders occur in many men in the early stages of prostatitis. The compensatory mechanism during this period manifests itself in the hypertrophy of the bladder and ureteric muscles, which reduces the symptoms of dysuria.

There are no pain receptors in the prostate tissues. Pain occurs when the inflammatory process spreads to other pelvic organs and their nerve pathways. The sensations range from weak and aching to very intense, which interfere with night rest.

The discomfort increases with ejaculation, sexual abstinence, or excessive sexual activity. Pain radiates to the perineum, sacrum, scrotum, and sometimes to the lumbar area.

Lack of treatment in the early stages of prostatitis can lead to sexual disorders when a man has frequent nocturnal erections, impaired quality of orgasm, and quick ejaculation. These signs appear with different intensities in different patients.

Premature ejaculation occurs due to a decrease in the orgastic center’s excitability threshold. At the same time, the patient has painful sensations, which leads to the development of pain waiting syndrome and gradual withdrawal from sexual life.

In the absence of comprehensive treatment with working through the disorder’s mental factor, sexual dysfunctions become more and more aggravated. Ignoring the need to seek medical help for prostatitis often ends in impotence.

The degree of sexual dysfunction varies depending on individual factors. Some men are so afraid of erectile dysfunction that suggestions rather than objective physiological factors cause their disorders.

In particular, psychogenic sexual disorders are observed precisely because of anxiety and obsessive fears. Such patients heavily tolerate the very thought of possible disorders of male health. It strongly affects their character and communication with others. Irritability, hypochondria, grouchiness, and a depressive state appear.

The lack of adequate treatment for prostate inflammation leads to concomitant diseases. The fact is that the prostate gland is closely connected with other male genitourinary system organs. It is located around the neck of the bladder and the urinary tract. Therefore, when the prostate is enlarged, the urethra is squeezed, and the normal outflow of urine is disturbed.

Considering the peculiarities of physiology, untimely treatment of acute or chronic prostatitis results in several serious pathologies and complications like:

Some consequences of prostate inflammation pose a threat to the health and the patient’s life. Therefore, it is vital to consult a urologist at the first prostatitis symptoms.

Do not forget about regular preventive examinations after 40 years, when the risk of pathological processes in the prostate gland increases significantly.

Many urological problems have similar signs. That is why a specialist works with each clinical case separately and uses all available diagnostic tools. The urologist’s consultation always begins with an interview for symptoms, a medical history, and a general examination. Then the doctor prescribes a series of studies and then selects the appropriate treatment.

Typically, the set of examinations includes:

To ensure an accurate diagnosis of prostatitis in men and related disorders, you need to refrain from urinating for 2-3 hours before seeing a urologist. Otherwise, the test results may not be entirely correct since the pathogenic microflora is washed out when the bladder is emptied.

The primary therapy is the administration of antibiotics. The use of modern pharmacological developments gives a high result, although it is impossible to exclude the risk of relapse completely.

The doctor prescribes an antibacterial drug after a bacterial test of urine and/or prostate secretion for the type of pathogen. If you have acute prostatitis, oral antibiotic therapy takes about 4-6 weeks.

In the case of a chronic or recurrent form of the disease, treatment will take longer. Severe cases (usually acute bacterial prostatitis) require hospitalization and an intravenous course of antibiotics.

With difficult urination, the urologist prescribes medications that relieve the hypertonicity of the bladder and prostate muscles, normalizing the outflow of urine and preventing its stagnation.

In some cases, a doctor may prescribe drugs that reduce sex hormone levels. As a result, there is a decrease in the prostate’s size and, accordingly, the feeling of discomfort when urinating, defecating, and ejaculating.

Muscle relaxants can help with a substantial swelling of the prostate gland. They relieve overstretching of the sphincter of the bladder and adjacent muscles.

Prostate massage is a frequently used urological technique. The doctor uses the method of finger stimulation of the prostate gland through the rectum to enhance secretion.

An additional effect is the improvement of blood circulation and accelerated penetration of antibiotics into the inflamed tissues. In addition to finger massage of the prostate, hardware methods are also possible.

Shockwave therapy shows high results in the treatment of prostatitis. The basis of this medical technology is the short-term impact of low-frequency sound waves on the inflamed area. The procedure helps to:

Usually, prostatitis symptoms are relieved, and an excellent prophylactic effect is achieved after SWT. You can get an expressed result only with a comprehensive approach to the problem. Besides, a responsible attitude of the patient to medical prescriptions is important.

To minimize the risk of recurrence, reduce the negative effects on the body. Among the provoking factors are:

Deficiency of physical activity. Sitting at work and a sedentary lifestyle leads to congestion in the pelvic organs.

Abuse of alcohol. Exceeding the daily norm of alcohol affects health in general and makes the body more vulnerable to various infectious lesions.

Stress conditions. Avoid situations leading to anxiety, irritation, and depressive disorders as much as possible.

Excessive physical activity and fatigue. Do not forget to have a rest and avoid lifting heavyweights.

Preventive measures will help avoid the development of acute prostatitis and relapses of chronic prostatitis.

You can always contact our clinic’s urology department to diagnose and treat prostate inflammation.