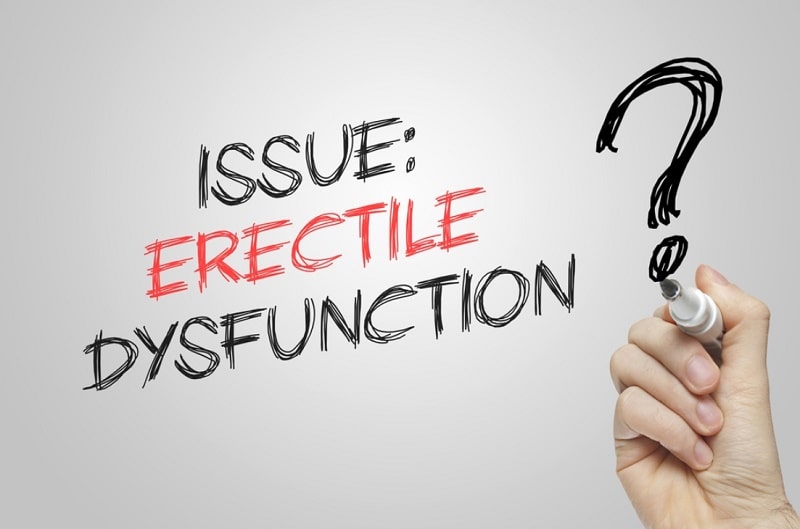 What is Erectile Dysfunction?

Sexual health – is one of the vital constituents of general emotional and physical health in every person. Although erectile dysfunction is not a life-threatening condition, this health problem should never be considered any trivial problem. Erectile dysfunction is a widespread and severe disease that requires appropriate treatment.

Erectile dysfunction is a men’s sexual problem manifested in the inability to achieve and maintain an erection sufficient for sexual intercourse. Men who have erectile dysfunction aren’t sterile, have typical sexual characters, and possess orgasm and ejaculation like other healthy men.

Most men can sometimes experience problems with achieving and maintaining an erection. It may be related to overstress, alcohol, smoking, or over-fatigue. However, if this problem becomes common, it is probably erectile dysfunction.

This disease currently affects more than 100 million men worldwide and nearly 30 million men in the USA. Clinical trials in the UK, Germany, France, Canada, Italy, and Spain show that almost 39% of men experienced erectile dysfunction in their life. Some American investigations determined that nearly 52% of men aged 40 to 70 suffer from erectile dysfunction.

How Does An Erection Develop?

To fully answer this question, a person must understand the anatomy of the male penis. The penis consists of a penile root, shaft, and glans. The male penis is made of cavernous tissue, allowing it to develop an erection when a male is aroused. The fundamentals of normal sexual function consist of normal penile innervation and penile blood flow.

The process of erection development starts when the male is sexually stimulated, and nerve impulses are being sent to the nervous ends in the penile tissue. Then the vessels are dilated, and the cavernous body fills with blood.

The second essential component of maintaining an erection is the venous drainage system. In any part of the human body, veins are vessels through which the body flows out of an organ.

In the penis, the process is altered significantly. As when the penis begins to become erect and the cavernous body is filled with blood, it presses the small veins, thus preventing the blood from flowing out of the penis.

Due to the above mechanism, the venous blood outflow is blocked. It is resumed only when the inflow of blood to the cavernous body through the arteries is stopped. Or, in other words, when there is no sexual stimulation.

When a male is aroused, his brain sends impulses to the nerve endings located in the tissues of the penis. It leads to the dilation of the arteries and increased blood flow into the cavernous tissue.

At the same time, veins of the penile tissues are constricted, blocking the outflow of blood from the penis. When sexual stimulation is stopped, the blood rapidly leaves the cavernous body, and the penis becomes relaxed.

In conclusion, the mechanism of erection looks like the following way:

If any of the processes mentioned above is somehow altered, a man suffers from erectile dysfunction.

Why Does Erectile Dysfunction Occur?

It is essential to understand the mechanism of erection to find out why erectile dysfunction occurs. When a man is sexually excited, his brain sends impulses through the spinal cord to the nerve ends of the penis’ cavernous tissue.

The release of nitrogen oxide stimulates the cascade of chemical reactions leading to relaxation of the smooth muscles and increasing blood flow to the penis and decreasing blood outflow. All of this results in an erection. Insufficient relaxation of the blood vessels of the penis and reduced blood flow may lead to a lack of an incomplete erection.

What Are The Main Causes Of Erectile Dysfunction?

A lot of people consider that erectile dysfunction is an inevitable health problem in the elderly age.

Many substances can affect potency. Let’s try to clear up which are the main factors that may contribute to erectile dysfunction development.

Alcohol. In small doses, alcohol exerts stimulating action on the central nervous system. In high doses, it causes damages to the liver and, as a result, disturbs the metabolism of male sex hormones. Alcohol also affects the processes associated with ejaculation.

Nicotine is an alkaloid obtained from tobacco. The main adverse effect of nicotine is in the small blood vessels’ spasms, including those that supply penile muscles with blood. Along with this effect, nicotine damages blood vessels, causing atherosclerosis development.

Atherosclerosis of the blood vessels disturbs blood flow in the penile muscles. It results in the inability to achieve and maintain an erection.

Drugs may significantly affect erection mechanisms. Common medications that are known to cause problems with erection achievement include:

In general erectile dysfunction causes can be classified into 5 main categories:

Disorders of the vascular system:

Organic changes of the penis:

Diabetes, hypertension, smoking, and vascular diseases occupy 80% of all cases of erectile dysfunction. Diabetes affects penis nerves, making them less sensitive and damages the smooth muscle of the cavernous body.

Lifestyle can also serve as one of the leading causes of sexual dysfunction. Smoking, alcohol abuse, narcotics – all of these can significantly increase your chance for ED development.

Smoking is one of the leading causes of penile angiosperm characterized by disruption of capillary circulation.

Sixty percentage of erectile dysfunction causes are associated with insufficient blood pressure to the penis and increased blood outflow. In 15% of cases, the reason is in central nervous disorders due to endocrine diseases with psychological problems causing only 20%.

How Is Erectile Dysfunction Diagnosed?

The use of certain prescription medications is one of the leading causes of ED. Nearly 25% of all erectile dysfunction cases are associated with drug therapy. By substituting certain medications, the problem is usually alleviated.

Physical examination is very important as well. For example, if there are problems with the sensitivity of the penis to touch, there can be neurological diseases. Disorders of secondary characteristics such as breast enlargement can point to a hormonal imbalance.

Your doctor can determine if the circulatory system’s disorder causes your problem by observing decreased heart rate in the wrist or ankles. Specific characteristics of the penis can also point to erection problems. For example, anatomical deformation (Peyronie’s disease) may result in problems with erection achievement.

In some cases, your doctor may suggest monitoring of erection that occurs during sleep. Nocturnal penile tumescence tests can help to reveal specific psychological causes of erectile dysfunction. Usually, healthy men have regular and involuntary erections during sleep. If these involuntary erections do not occur, problems with erection are more likely associated with physiological causes. But in many cases, you can’t 100% rely on nocturnal erection tests.

How Often Is Erectile Dysfunction Observed?

According to the statistics:

Erectile Dysfunction in men is rising:

How To Cure Erectile Dysfunction?

For many men, a few lifestyle changes may be sufficient to restore erection. These things include:

The next treatment is considered to be cutting back on any medicines with side effects affecting erection.

Counseling is one of the most frequent approaches to erectile dysfunction management. Some experts usually treat the psychological type of erectile dysfunction using special techniques that relieve anxiety and fear associated with sexual intercourse. The sexual partners can help with these techniques, including gradual development of sexual stimulation and intimacy.

In most cases, you can treat erectile dysfunction with medicines. ED drugs can be taken by mouth, injected directly into the penile tissue, or inserted into the urethra. The most widespread medications include Viagra (sildenafil citrate), Cialis (tadalafil), Levitra (vardenafil), and Staxyn.

All these medicines belong to a group of drugs called phosphodiesterase (PDE) inhibitors. These drugs work by enhancing the effect of nitric oxide and relaxing the smooth muscle of the penis. It finally results in increased blood flow and potent erection. None of these PDE inhibitors should be used more than once a day.

A lot of men achieve a strong erection by injecting certain medicines into the penis. This medication works by significantly widening penile blood vessels and thus increasing blood flow. Injectable Ed drugs include:

Among the pellet system, the most widespread is MUSE (alprostadil). The system consists of a prefilled applicator that delivers the pellet with alprostadil into the urethra. Erection occurs within 8-10 minutes and lasts from 30 to 60 minutes.

When the mentioned above treatments do not help, the health care provider may recommend surgical interventions. Treatment of erectile dysfunction through surgery is usually based on the following approaches:

Which ED Drug Is The Best?

Your doctor will offer you different treatment options depending on the causes and the degree of erectile dysfunction. In most cases, you will benefit from taking stimulating medications: Sildenafil (Viagra), Tadalafil ( Cialis), Vardenafil (Levitra), or Avanafil (Stendra). All these ED drugs are considered the best and the safest medications to treat erectile dysfunction.

All of these ED drugs enhance the effects of nitric oxide. It is a natural chemical that the body produces to relax the penile muscles and stimulate blood flow.

Before taking any medication, including over-the-counter supplements and herbal remedies, consult your doctor to make the right choice.

ED pills may not work right away. It may take time to find the right one and the dosage. Medications may be less effective in certain conditions, for example, if you have diabetes or after prostate surgery.

Take ED pills with caution if you:

How Long Does ED Last After Prostate Surgery?

You will be able to resume sexual activity after the removal of the catheter.

After prostate surgery, it will take some time (weeks to months) for you to recover erectile function. In the first weeks after catheter removal, you may not be able to achieve an erection firm enough for sex, even with medication such as Viagra.

If medication does not help you, there are other ways to treat erectile dysfunction that you can use. Discuss all possible methods of improving erectile function with your physician.

Which Drugs Can Cause Erectile Dysfunction?

Previously, drug-induced ED accompanied older men almost always when drug therapy of chronic diseases was required. Today, pharmacology offers drugs without such side effects. And treatment of drug-induced impotence practically always ends with the restoration of an erection.

Medications affecting nerve impulses and change the level of hormones in the blood can cause impotence.

Drugs from the following groups can provoke erectile dysfunction:

However, medications that interfere with the male hormonal balance can cause impotence in the first place. It applies to finasteride and dutasteride, drugs that are used to treat the prostate gland. Finasteride (Propecia) is also used to treat premature baldness.

What Age Does ED Start?

Medical experts claim that ED and age have no connection.

According to the data collected, they were able to determine that in 30% of cases, the condition is diagnosed in older men and 10% in younger men.

Medicine has long known that a significant slowdown of testosterone production in the body is observed after 35, and this process begins to act after 27.

Of course, we cannot say with certainty that this can happen to every man because it depends on many individual factors.

Usually, men after the age of 35 face ED problems because the production of testosterone starts to slow down in this period. As we know, this hormone is mainly responsible for the ability to sex life.

Problems with potency in men at a young age have become more common. It is not primarily due to any psychological stress or pathology but with the wrong lifestyle.

We can conclude that men after 50 years of age are more prone to ED problems.